Cooperative Research Between Industry and Academy

Practical learning with on-site experience is the cornerstone of national competitiveness.

With practicality as its educational philo-sophy, Ajou University has focused on research that can be industrialized and the cultivation of talented professionals with competence in the industrial fields.

There is a growing consensus in the 21st century that university should engage in practical research that can be industrialized. Ajou University boasts its active research in partnership with industrial fields as the research projects commissioned by businesses account for 38.8 percent of the total projects it was commissioned by outside institutions. As joint research activity between academy and industry is much demanded by

Ajou University aims to establish itself as an industry cluster-type industrial-academic research center based on its experience in research activity in the past. It strives to develop new technology and further synergetic effects through comprehensive cooperation with industrial fields in terms of sharing technology development, equipment, and facilities, various legal matters on intellectual property rights, technology transfer and technology sales, and human resources in the global era. The industrial-academic cooperation team designed for the vitalization of industrial-academic research is building industry clusters in various fields based on businesses scattered throughout Gyeonggi Province and operating various support programs for them.

Ajou University is leaping forward in a bigger world beyond the boundaries between disciplines!

Ajou University is making every effort to boost research activities by its faculty by supporting interdisciplinary research groups organized by faculty members in two or more major areas for the promotion of research on technological convergence. As part of its effort, the university is joining major research centers sponsored by Gyeonggi Province, including the NANO fab centers already constructed or being under construction in Kwanggyo Techno Valley?and biotechnology centers near the university. Such joint R&D projects are expected to increase in the future and Ajou University plays a critical role in them.

As a university focusing on science and engineering, Ajou University completed the construction of the medical school and the university hospital vital to industrial-academic cooperation in the medical industry field, an important area in the BT and NT industries, the core technological convergence industry in the future.

With the foundation of the School of Information Technology for the first time in Korea, Ajou University is gaining a headstart in the technological convergence industry and strengthening its competitiveness in the digital content area. 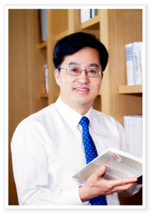