When you were here before,

couldn't look you in the eye.

your skin makes me cry.

in a beautiful world

I wish I was special,

you're so fuckin' special.

What the hell am I doing here?

I don't care if it hurts,

I wanna have control.

I want a perfect body,

I want a perfect soul.

I want you to notice,

when I'm not around.

I wish I was special.

What is the hell am I doing here?.

Whatever makes you happy,

You're so fuckin' special,

I wish I was special,

What is the hell am I doing here?

1.The Pretenderscovered "Creep", a live version is included on their "Kid" EP.

2.Tears For Fears covered "Creep" live and it appears as a b-side on their single, "Raoul And The Kings Of Spain" (Epic 1995), but the band didn't credit Radiohead.

3.Japanese singer ACO has also covered this song on her single "heart wo moyashite."

4.Japanese singer Shiina Ringo has also covered this song live at Club Asia in Shibuya and Ritsumei Kan in Kyoto, which have both since circulated the net.

5 In 2004 Damien Ricerecorded an acoustic version of "Creep" at an Irish radio station, which has since circulated the net. He also occasionally performs the song live at his concerts.

6.Sophie Koh has covered the song, and can be found on Triple J's cover compilation record "Like a Version"

7.Moby has covered the song on various occasions, including a performance on Late Night with Conan

8.O'Brien and at the 2003 Glastonbury Festival, which Radiohead headlined.

11.Jessicka Fodera's new band Scarling. covered "Creep" and it can be found on their single "Band Aid Covers the Bullet Hole"

12.The song inspired this animation from Laith Bahrani.

13.Jeff Buckleyonce did a cover of "Creep" in one of his live performances.

16.A version 'sung' by Macintosh SimpleText voice 'Fred' (also heard in Radiohead's "Fitter Happier") was released on Me and This Army, an album of Radiohead remixes.

17.Marty Casey of the Lovehammers performed "Creep" on the television show Rock Star: INXS in 2005.

18.Lukas Rossi from the band Rise Electric performed "Creep" on the reality television show Rock Star: Supernova in 2006. He played it as an encore as well.

21.Dustin Kensrue played the song on one of his solo tours.

23.The Scottish singer Carol Laula recorded a cover for her 2002 album, First Disciple.

25.U2 frequently snippetted the song at the end of "Elevation" on their Elevation Tour in 2001.

28.Scala, a Belgian teenage cover choir, sang the song on their album "On the Rocks".

29.Rapper Chino XL created a song by the name of Kreep sampling the lines "I'm a creep, I'm a loser, you're so very special, I wish I was special".

30.Australian alternative rock band The Final Straw recorded a cover to be released on their 2007 self titled EP.

31.There is a video on YouTube that plays the song Creep along with clips of Oz prisoner Donald Groves. 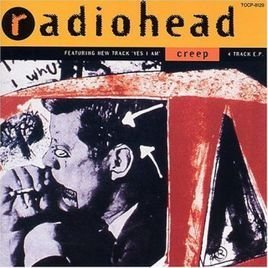