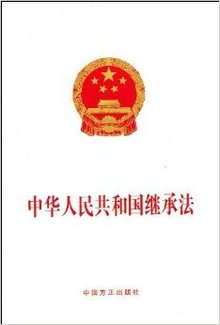 Chapter IV Disposition of the Estate

Article 1 This Law is enacted pursuant to the provisions of the Constitution of the People's Republic of China with a view to protecting the right of citizens to inherit private property.

Article 2 Succession begins at the death of a citizen. Article 3 Estate denotes the lawful property owned by a citizen personally at the time of his death， which consists of：

（2） his houses， savings and articles of everyday use；

（3） his forest trees， livestock and poultry；

（5） means of production lawfully owned by him；

（6） his property rights pertaining to copyright and patent rights； and

（7） his other lawful property.

（1） intentional killing of the decedent；

（2） killing any other successor in fighting over the estate；

（3） a serious act of abandoning or maltreating the decedent； or

（4） a serious act of forging， tampering with or destroying the will.

Article 8 The time limit for institution of legal proceedings pertaining to disputes over the right to inheritance is two years， counting from the day the successor became or should have become aware of the violation of his right to inheritance. No legal proceedings， however， may be instituted after the expiration of a period of 20 years from the day succession began.

Article 9 Males and females are equal in their right to inheritance.

Article 18 None of the following persons shall act as a witness of a will： （1） persons with no capacity or with limited capacity； （2） successors and legatees； or （3） persons whose interests are related to those of the successors and legatees. Article 19 Reservation of a necessary portion of an estate shall be made in a will for a successor who neither can work nor has a source of income.

Article 20 A testator may revoke or alter a will he previously made. Where several wills that have been made conflict with one another in content， the last one shall prevail. A notarial will may not be revoked or altered by a testator-written will， a will written on behalf of the testator， a will in the form of a sound- recording or a nuncupative will.

Article 21 Where there are obligations attached to testamentary succession or legacy， the successor or legatee shall perform them. Anyone who fails to perform the obligations without proper reasons may， upon request by a relevant organization or individual， entail nullification of his right to inheritance by a people's court.

Chapter IV Disposition of the Estate

Article 23 After the opening of succession， a successor who has knowledge of the death should promptly notify the other successors and the testamentary executor. If one of the successors knows about the death or if there is no way to make the notification， the organization to which the decedent belonged before his death or the residents' committee or villagers' committee at his place of residence shall make the notification.

Article 24 Anyone who has in his possession the property of the decedent shall take good care of such property and no one is allowed to misappropriate it or contend for it.

（2） where a testamentary successor is disinherited；

（3） where a testamentary successor or legatee predeceases the testator；

（5） where no disposition is made under the will for part of the estate.

Article 28 At the time of the partitioning of the estate， reservation shall be made for the share of an unborn child. The share reserved shall， if the baby is stillborn， be dealt with in accordance with statutory succession.

Article 29 The partitioning of a decedent's estate shall be conducted in a way beneficial to the requirements of production and livelihood； it shall not diminish the usefulness of the estate. If the estate is unsuitable for partitioning， it may be disposed of by such means as price evaluation， appropriate compensation or co-ownership.

Article30 A surviving spouse who remarries is entitled to dispose of the property he or she has inherited， subject to no interference by any other person.

Article 32 An estate which is left with neither a successor nor a legatee shall belong to the state or， where the decedent was a member of an organization under collective ownership before his or her death， to such an organization.

Article 34 The carrying out of a legacy shall not affect the payment of taxes and debts payable by the legator according to law. 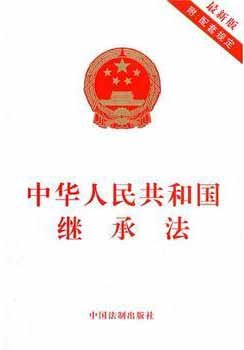