Chapter 1Source of Rule of Law: From "Ruled by Law" to Promoting Law-based Governance of a Country in an All-around Way

IConnotation and discrimination of rule of law

IIHistory of rule of law in China and Western countries

Chapter 2Follow the Right Path: Adhere to the Path of the Socialist Rule of Law with Chinese Characteristics

IIPath of socialist rule of law with Chinese characteristics: What is its destination?

IIIPath of socialist rule of law with Chinese characteristics: What should we adhere to?

Chapter 3Foundation of National Stability: The Country Should Be Ruled in Line with the Constitution

IThe Constitution is the fundamental law of the country

IIEnhance the authority of the Constitution

IIIPerfect the systems of Constitution implementation and supervision

IVPromote the spirit of the Constitution in the whole

VIStrengthen limits on and oversight of administrative powers

IJudicial justice is the lifeblood of rule of law

Chapter 7Concept of Rule of Law: Create a Law-abiding Society

IWhat is the concept of rule of law?

IIHow to advance law publicity among the people and cultivate concept of rule of law?

IIIHow to nourish rule of law spirit with virtue?

Chapter 8Leadership of the Party: Most Fundamental Guarantee to Socialist Rule of Law

IWhy socialist rule of law cannot be realized without leadership of the Party?

IIIStrengthen the establishment of Party rules and regulations 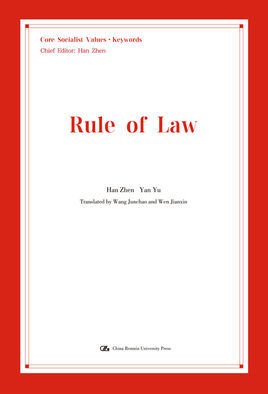