-->He said that he was very sorry.

"You should be more careful next time," my father told me.

-->My father told me that I should be more careful the next time.

She said to her son, "I'll check your homework tonight."

-->She said to her son that she would check his homework that night.

He asked me, "Will you go to the station with me to meet a friend of mine this afternoon?"

-->He asked me whether I would go to the station with him to meet a friend of his that afternoon.

"I am very glad to visit your school", she said.

-->She said she was very glad to visit our school.

Tom said, "We are listening to the pop music."

-->Tom said that they were listening to the pop music.

Mother asked, "Have you finished your homework before you watch TV?"

-->Mother asked me whether I had finished my homework before I watched TV.

He asked the conductor, "Where shall I get off to change to a No. 3 bus?"

-->He asked the conductor where he would get off to change to a No. 3 bus.

"Why did she refuse to go there?" the teacher asked.

-->The teacher asked why she had refused to go there.

Tom said, "We were having a football match this time yesterday."

-->Tom said that they were having a football match that time the day before.

He said，"I haven't heard from my parents these days."

-->He said that he hadn't heard from his parents those days.

She said, "He always feels tired."

→She said (that) he always feels tired.

-->He always says that he is tired out.

-->He will say that he will try his best to help me.

He said，"When I was a child, I usually played football after school."

He said that when he was a child, he usually played football after school.

Our teacher said to us, "Light travels faster than sound."

-->Our teacher told us that light travels faster than sound.

-->He said that practice makes perfect.

7)当直接引语中有情态动词should, would, could, had better, would rather, might, must, ought to, used t-o, need时，如:

-->The doctor said I'd better drink plenty of water.

He said, "She ought to have arrived her office by now."

-->He said that she ought to have arrived her office by then.

The teacher said, "You needn't hand in your compositions today."

-->The teacher said we needn't/didn't need to/didn't have to hand in our compositions.

She asked, "Must I take the medicine?"

--> She asked if she had to take the medicine.

Teacher: You may have the ball game this afternoon.

Student : What did the teacher say, Monitor?

Monitor: He said we might have the ball game this afternoon.

--> She said that she wouldn't go there any more..

She said, "Our bus will arrive in five minutes."

→She said that their bus would arrive in five minutes.

②直接引语如果是反意疑问句，选择疑问句或一般疑问句，间接引语应改为由whether或if引导的宾语从句.如:He said, "Can you swim, John?"

→He asked John if he could swim.

"You have finished the homework, haven't you?" my mother asked.

→My mother asked me whether I ha-d finished the homework.

"Do you go to school by bus or by bike?"

→He asked me if I went to school by bus or by bike.

She asked me, "When do they have their dinner?"

→ She asked me when they had their dinner.

"Don't make any noise," she said to the children.

→She told (ordered) the children not to make any noi-se. "Bring me a cup of tea, please," said she.

→She asked him to bring her a cup of tea.

John said, "I'm going to London with my father."

John said that he was going to London with his father.

He said to Kate. "How is your sister now?"→He asked Kate how her sister was then。

→She said he would go to see his friend。

Jack said. "John, where were you going when I met you in the street?"

He said, "I get up at six every morning。"

→He said he gets up at six every morning。

Peter said. "You had better come have today。"

→Peter said I had better go there that day。

He said, "These books are mine."

→He said those books were his. 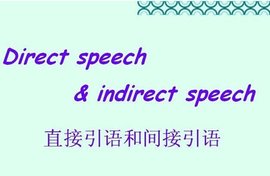